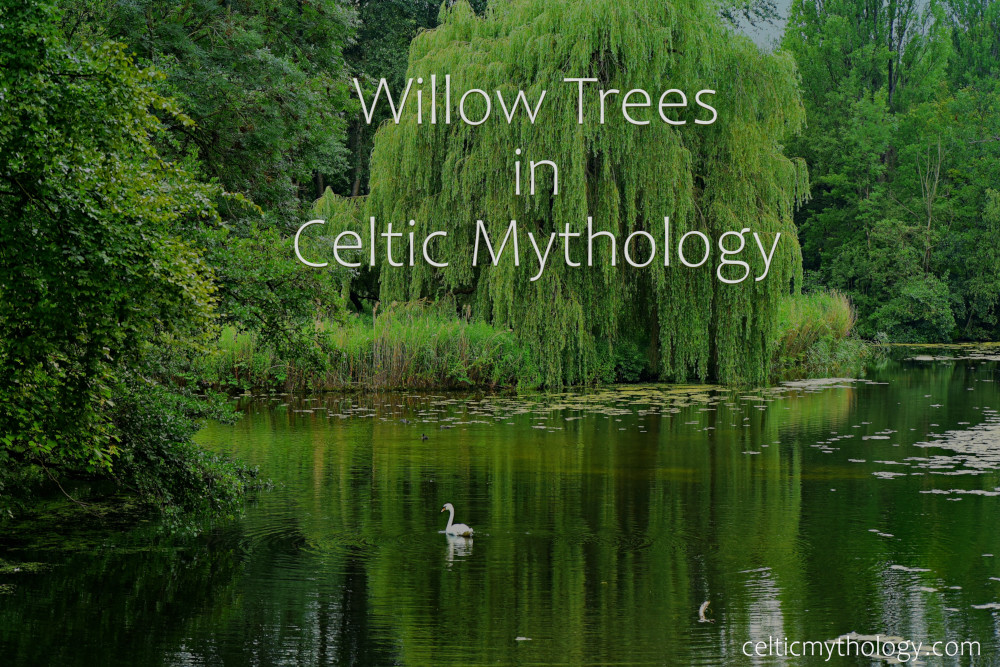 Willow trees are important in the creation story of Celtic Mythology, and were thought of as sacred because they grow mostly on riverbanks and lochsides, which held special spiritual significance in Celtic culture.

The unique beauty, and unmatched practicality of the tree means the Willow features often in the stories and legends of each of the Celtic nations.

What the Willow represents in Celtic Mythology:

Willow is most often associated with water, new growth and healing, optimism, movement, and adaptability.

In modern times the tree has become associated with witchcraft and Wicca and sometimes sadness, but this was not the case to the original Celts, who valued the tree immensely and associated it with optimism and growth.

Each of the traditional Celtic festivals celebrate the time between the seasons, the sacred wells of Ireland are found at the source of the rivers of Ireland, where land becomes water. Trees were afforded special spiritual significance if they grew on one of these borders.

The Willow grows on one of these sacred boundaries, on the border between land and water.

Another example of this is the Rowan tree – the most sacred tree in all of Celtic culture, which grows on mountain summits, at the border between heaven and earth.

Celtic Creation and the Willow:

In one version of the druidic story of creation, the branches of the willow tree cradled two scarlet eggs. When these eggs hatched, one formed the sun and the other formed the earth.

This story was celebrated at the spring festival of Beltane, with dyed or painted eggs. After Christianity arrived in the Celtic nations, this existing Celtic practice was adapted by the church and later became the Christian celebration of Easter.

In many cultures, the Willow has been associated with melancholy and sorrow, but this was not the case in Celtic culture. Willow is known for its ability to relocate after being uprooted, either by nature or by man.

A fallen Willow can float downstream, and set down roots wherever the current takes them. In this way, more than any other tree the Willow became a symbol of overcoming adversity.

Although many Celtic stories and legends are incredibly tragic, in the case of the willow the Celts preferred to focus not on adversity, but instead on celebrating the Willow for its unmatched capacity for healing and new growth.

In druidic medicine, the willow was used to treat melancholy, for people who had suffered misfortune, and to help people remember their dreams.

Willow had many practical uses in Celtic culture. The flexible, thin, straight and long branches of the Willow were perfect for building and weaving.

The Celts, along with most other historic European cultures used Willow or Hazel branches to construct dwellings with what we now call Wattle & Daub, a building method using clay and woven branches.

In addition to dwellings, Willow branches were used in every day life, to create furniture, fences, baskets, tools and weapons.

When Christianity arrived in Celtic lands, the church were unhappy with the worship of nature, trees and the gods of Celtic mythology. For the Christians, there could only be one god and thus many negative stereotypes were perpetrated against Celtic culture and traditions.

The old English word “wic” means “to bend”, and became used to describe the native rural population of the Celtic nations who used wicker for building and crafting.

Wiccan became a derogatory term for the Celts who followed the old ways and refused to adopt Christianity. Eventually this was used as a derogatory slur, and associated with witchcraft and devil worship by the Christian church. Willow became known as “The witches’ tree”.

The word Wicca is still used today to describe paganism and the occult.

Willow in the Ogham Alphabet:

Willow features in the Ogham alphabet as the letter Saille.