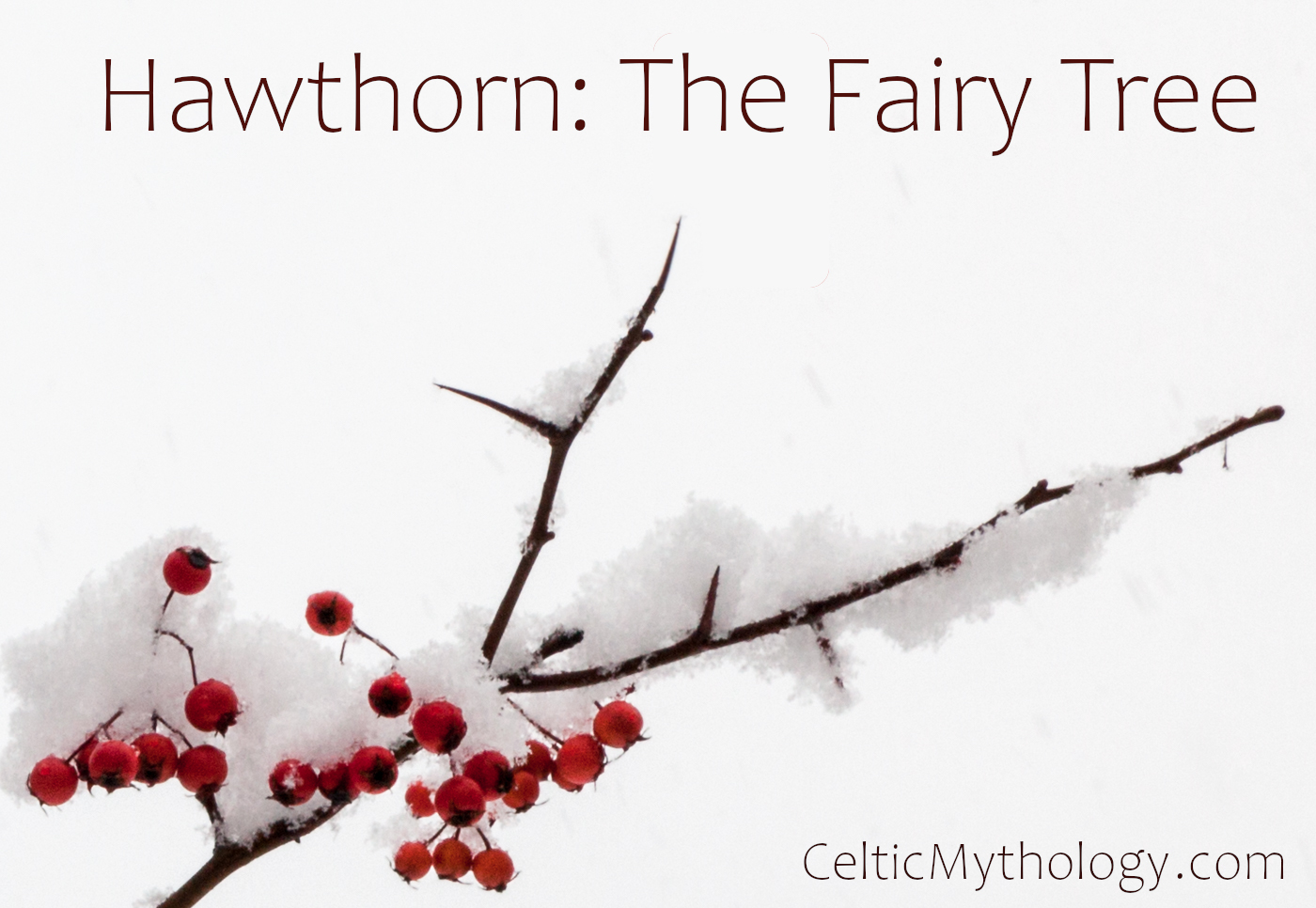 Also known as the Fairy Tree, the Lonely Bush, and the Queen of May, the Hawthorn is an interesting tree in Celtic Mythology. It was celebrated for its incredible beauty and its ability to support life, yet deeply feared and respected, for it was said to be homed to fairies who would curse any who harmed it.

The Beauty of Spring

Hawthorn has a distinct blossom, made up of tiny, delicate white petals which completely cover the plant in spring.

The blossoming of the Hawthorn is symbolic, signalling the end of the dark, cold winter nights, and the beginning of spring, fertility and new life.

At the festival of Beltane, young women would hold a twig of Hawthorn blossom to attract a husband.

The most common moniker for the Hawthorn is the Fairy Tree. So named because it was believed to be home to the fairies who lived in the Hawthorn to look after it. This name persists in some parts of Scotland and Ireland even today.

In Celtic Mythology, Fairies were not friendly, harmless sparkling little creatures that live at the bottom of your garden.

Fairies were feared and respected across the Celtic Nations, with tales of kidnapping and curses abound, so the Hawthorn was treated with care and respect.

In Irish tradition, strips of torn cloth were attached to the Hawthorn to appease the fairy guardians who live in it. This practice is still carried out today, in modern day Celtic countries it’s customary to attach small cloth rags or ribbons to a Hawthorn at Beltane, especially if the tree grows by a well.

Fear of the Hawthorn:

The Hawthorn is a tree of opposites, with several interesting juxtapositions that were not missed by the Celts.

In spring, the beautiful blossoms signal new life and the end of winter, but the blossoms hide the large, needle sharp thorns which cover the tree. In Celtic times, any infected wound could have been fatal, due to the lack of antibiotics so the Hawthorn especially was treated with care.

When in bloom, although the Hawthorn looks beautiful, the blossom is said to smell like death, due to the chemicals found in the plant which are also found in decaying flesh.

In Medieval England, it was remarked that the Hawthorn smelled like the Bubonic Plague, which was spreading across London at the time.

The tree is both admired for its life giving and protective properties, yet feared for its fairy inhabitants and their wrathful nature, should anyone damage the tree.

The story of the Downpatrick fairy tree:

This fear of Hawthorn continues even to this day, with countless stories of curses, kidnappings and injuries after damaging a Hawthorn or disturbing the fairies who protect them.

One such story, from Downpatrick in Northern Ireland tells of the felling of a Hawthorn to build a road. The Irish road workers knew the tales and refused to hurt the tree, leaving the entire tree for the English foreman to take care of himself.

Not believing the stories the foreman cut the tree, and as he did, hundreds of little white mice emerged from under the roots. As the mice scattered in to the surrounding countryside, the workers believed this to be the fairy guardians of the tree and further refused to work on the road.

As the foreman was transporting soil from the spot of the uprooted Hawthorn, a nearby horse became frightened, and ended up crushing the foreman against a wall, injuring him badly and eventually causing him to lose his leg.

Hawthorn has an almost unmatched capacity to support local wildlife. Hawthorn tree or hedgerow is often teeming with life, and the Celts definitely noticed this.

Birds, insects, mice and other small rodents all make their home in the tree and around the roots.

The berries of the Hawthorn (called Haws) ripen throughout the year, turning from green through spring an early summer to a deep red in August with the coming of autumn. The berries persist throughout autumn and often in to winter, providing food for people and birds.

Hawthorn in the Ogham Alphabet:

Hawthorn is known in the Ogham as ‘Huathe’ (and occasionally as ‘Huethe’) and represents the letter H.

It’s the sixth letter of the Ogham alphabet, and is formed by one vertical line, with a shorter horizontal line extending from the centre, to the left.