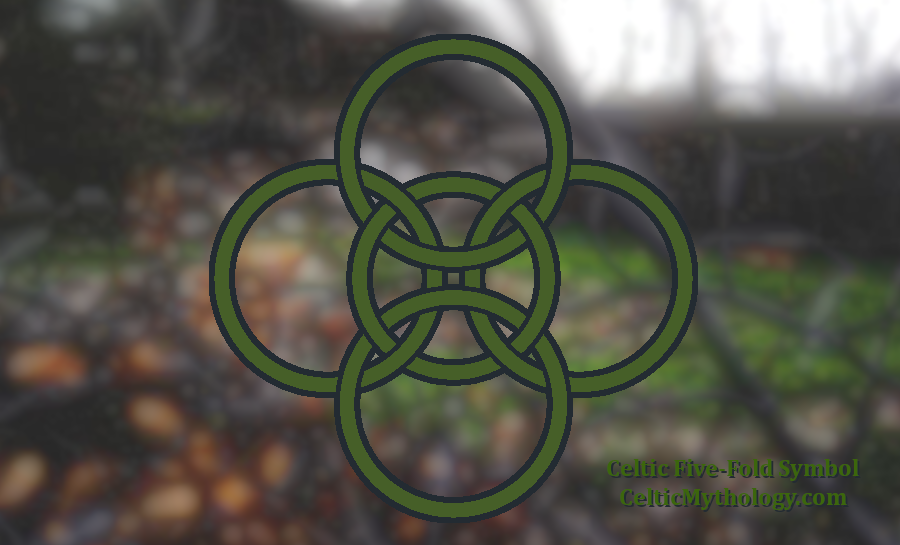 The Celtic Five Fold is a religious symbol found in Celtic Mythology, and in other cultures around the world. Also known as a Borromean Cross, it is comprised of five rings, arranged as four outer rings bound together by one central ring. The Five Fold symbol is often used in Celtic Jewelry and represents heaven, faith, spirituality and God.

The meaning of the Celtic Five Fold:

The five fold symbol is not unique to Celtic Mythology. In fact, the same symbol featured in many ancient cultures across the world. The symbol was used in Ancient Greece, in Malaysia and Polynesia and in cultures across Europe. In Celtic culture the Five Fold symbol represents God, spirituality, heaven, the universe, and the passage of time.

The number five is also often associated with protection, we find other examples of this for example in a pentagram, a pagan symbol of protection.

The five fold symbol appeared in the mythology of many European cultures, and was used to represent the four classical elements of fire, water, air, and earth, or the four seasons.

In Celtic culture, people were very connected to nature, their lives were shaped by the steady passage of time and the coming and going of the seasons.

The symbol is arranged in such a way that without the central ring, the outer rings would be completely separate and would fall away from each other. The central ring ties them all together.

The fifth ring, often representing a higher power of some form (God/nature/time/the universe/infinity) is crucial to the symbol, tying the whole thing together.

With the symbol of the Five Fold, Celtic people showed that they valued balance, spirituality, and had a respect for nature and the higher power it represents.