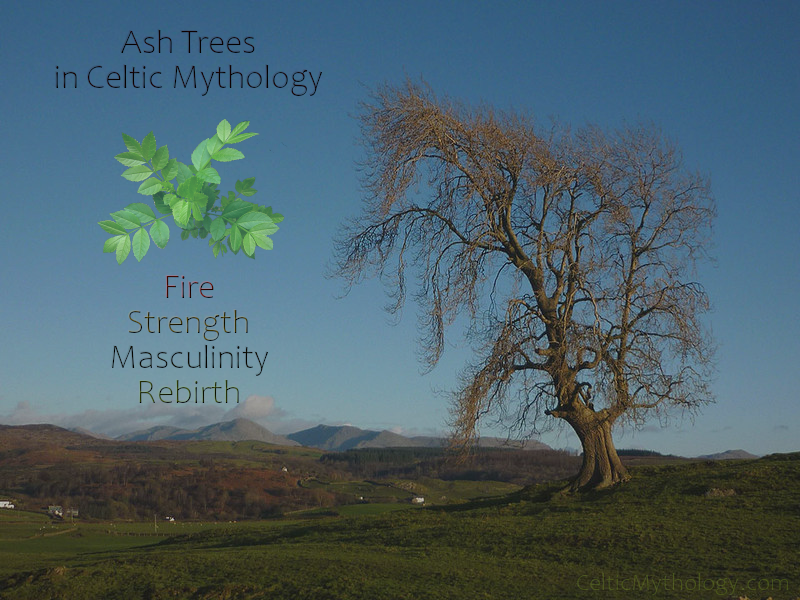 Ash trees often symbolise Strength due to their deep, strong roots and their hard flexible wood, which is highly valued for construction. Ash trees can grow to over 40m (130ft) tall and often stand alone, due to the amount of space their extensive root system needs.

Ash wood is highly flammable and is often associated with Fire. In Celtic traditions, Ash wood is burnt at the festival of Beltane, on the first day of Summer. The burning of Ash trees offered protection for the crops and cattle during the summer, and symbolised rebirth, change, and growth.


In the Autumn, the Ash takes on a deep orange colour, further lending to the associations with fire.

In some Druidic creation myths, Man was formed from Ash, and women from Rowan. For this reason Ash is often associated with Masculinity.

Ash trees are dioecious, which means that unusually, the male and female flowers grow on separate trees, or even on separate branches of the same tree. Ash is commonly seen as a symbol for balance.

This is also the case with Willow and Holly, both of whom were also revered in Celtic Mythology.

Ash tree in the Ogham Alphabet:

The Gaelic name for Ash is Nin, and it lends its name to the Ogham Celtic alphabet as the letter for N.

Many people choose to wear Ash Tree jewelry specifically for the associations with strength and new life. Whether or not the Ash is your Celtic Birth Tree, you may still wish to wear a piece celebrating the sacred Ash.