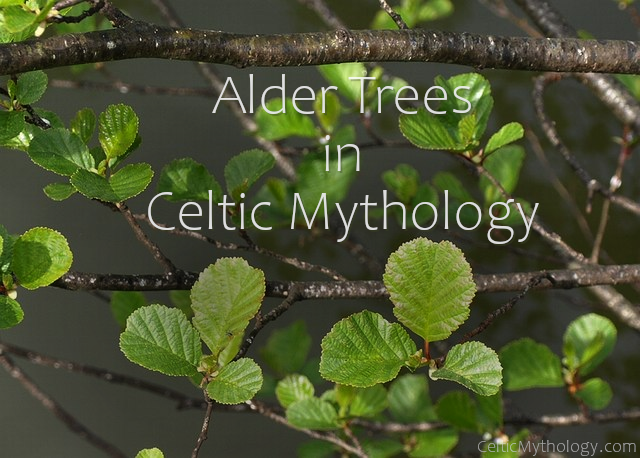 Alder trees feature often in Celtic Mythology and Folklore. They are said to be home to fairies, they are the symbol of Bran in Welsh Mythology and are most often associated with water, secrecy, nature, bad luck, spirituality, and balance.

Never far from water, Alder trees can most often be found lining the banks of a stream, loch, or river, or in boggy wet ground and swamps.

Alder wood can survive completely submerged in water, and was often used for construction of buckets, pipes, bridges over water, and other construction in wet conditions. Parts of Venice, Italy are built on top of Alder piles which were driven in to the swamp.

Many folk tales make note of the Alder connection to water. Alder was the symbol of Bran, the King of Briton in Welsh Mythology, who made several unlikely escapes across the seas and rivers.

The Blood of the Alder:

Alder trees were a source of great mystery to the Celts. Their sap turns a deep red when exposed to the air, as if they could bleed when cut.

The bleeding bark and affinity with water led to many negative superstitions about the trees. Alders were considered highly sacred, mysterious and secretive, often thought of as representing nature itself and containing the souls of our ancestors. For this reason it was considered extremely bad luck to cut them down.

The theme of secrecy, bad luck, and concealment comes up again and again in Celtic Mythology in relation to Alder trees. Only the Hazel Tree was considered more unlucky than the Alder.

The Irish figure Deirdre of Sorrows was said to have hidden in an Alder wood with her lover, fleeing the King of Ireland, to whom she was betrothed.

Coming upon an Alder when travelling was considered a bad omen, perhaps due to the soggy ground Alders thrive in, or the thick canopies that form when Alders grow together and block out the sunlight.

Alder Trees as a symbol of balance:

Like Ash trees, Alder trees produce both the male and female flowers. Unlike the Ash, the Alder produces one after the other, in a year long reproductive cycle.

Male Alder flowers are small, slender catkins, which gradually transition to the female flower (cones) in the Autumn, before falling off and growing new in Spring. The unique transition of the flowering cycle of the Alder tree represents balance, nature, and new life.

Alder in the Ogham Alphabet:

In Gaelic, the word for Alder is Fearn, which can also be found in the Ogham alphabet.

Alder Trees have a deep and rich meaning in Celtic Mythology and are a beautiful tree to consider for either Jewelry or as a Celtic Tattoo. A tattoo of a specific species is more meaningful in my opinion than a generic stylised tree, and each species has its own unique meanings and folklore attached.

Specifically, the themes of balance, new life, and the souls of our ancestors are well represented by the Alder tree.

The fruits and leaves of the Alder are unique and distinctive, and the uncommon transition from the male catkins to the female cone is rare amongst Celtic trees, making a beautiful piece representing masculinity, femininity, balance and new life.